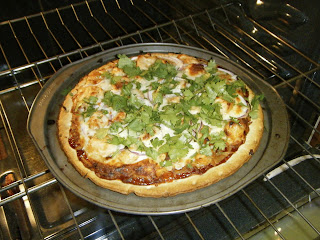 With football season in full swing, our intake of pizza has significantly increased. In an effort to keep things relatively healthy, however, I've been making our own, and I think I'm gonna be in the market for a pizza peel and baking stone in the near future so I can make my own dough! So, this month, I thought I'd share some pizza recipes during What's Cooking Wednesday. You might remember my traditional pizza recipe, so these pizzas will venture off the beaten path a bit! Enjoy!

For the chicken: In a large frying pan, cook the chicken in olive oil over medium-high heat until just cooked, 5-6 minutes. Do not overcook. Set aside in refrigerator until chilled through.  Once chilled, coat the chicken with BBQ sauce and set aside in the refrigerator.

For the pizza: If using a pizza stone and homemade dough, place the pizza stone in the center of the oven and preheat to 500 degrees for one hour before cooking pizza.

Transfer pizza to the oven; bake until the crust is crisp and golden and the cheese at the center is bubbly, 8-10 minutes. When the pizza is cooked, carefully remove it from the oven; sprinkle 1 tablespoon cilantro over the hot surface. 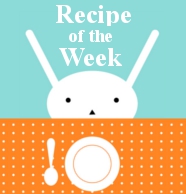 Recipe adapted from The California Pizza Kitchen Cookbook by Larry Flax and Rick Rosenfield.
Posted by Kate at 4:11 PM

Kate
I’m a Southern, All-American girl, but far from typical! The military is my family business and I’ve played just about every role you can imagine: Marine daughter, Naval Officer, and Navy wife! I'm a mommy of two hooligan boys as well as a Labor & Delivery Nurse. My blog is a place where I share recipes as I'm serving them up to my family...no fancy foodie photo shoots; this is as real as it gets!